By Paul Stastny15 November 2019 No Comments

Alberta has knowledge and expertise in energy and agriculture that is second to none, but some nascent industries in the province could also rise to become world leaders, according to angel investor Dr. Ray Muzyka who spoke at Launch Party 10 this November.

This year’s installment of Launch Party featured 15 of Calgary’s newest and most exciting startups, including Acuspire, Bitvo, CrossingsCloud, Embold, FluroTech, GOAT, Helm, among others. It also ran a Startup Job Showcase consisting of 19 companies looking to fill open positions. 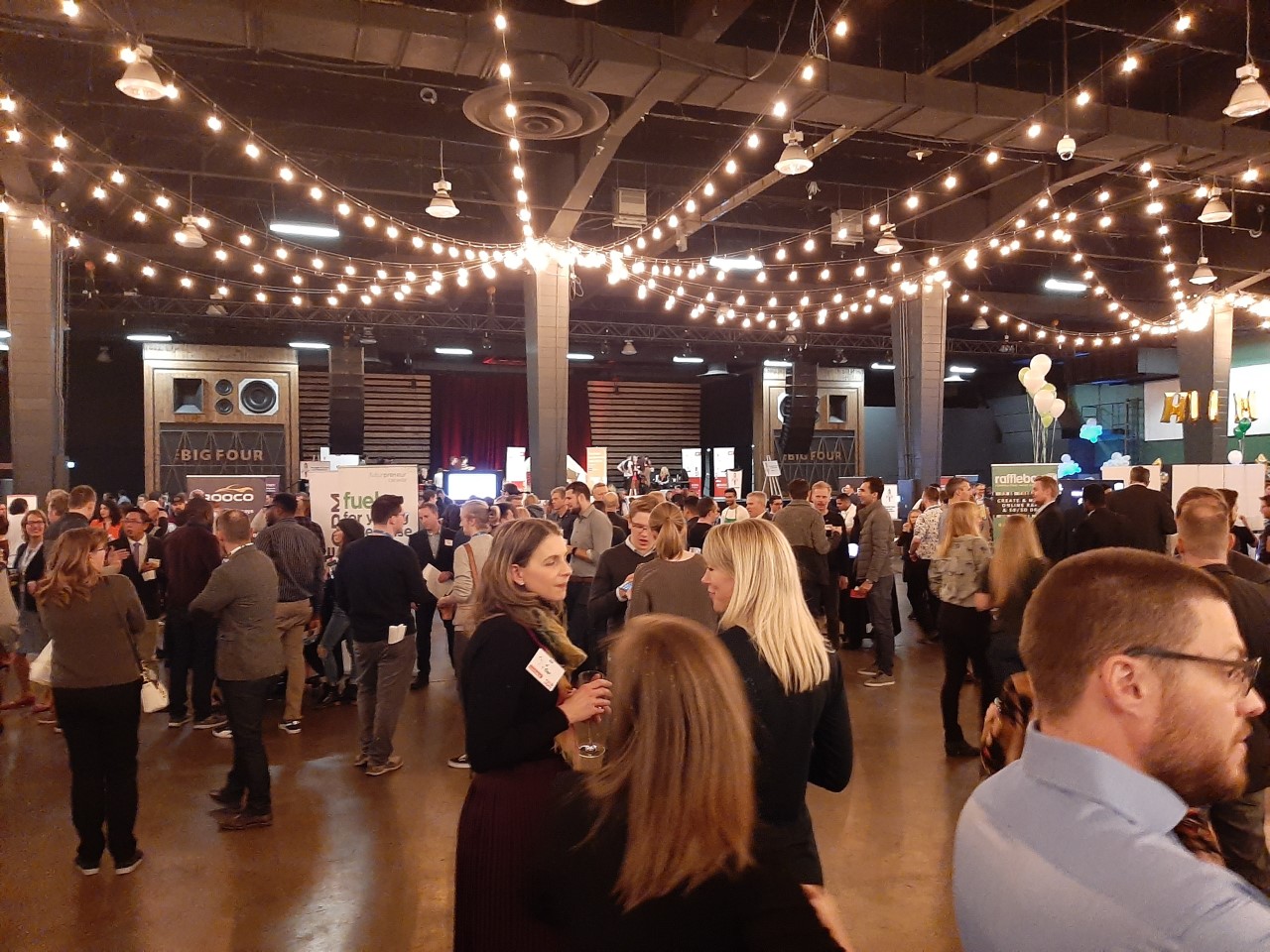 “The startup community is a very important part to the future growth and employment opportunities in Calgary,” she said.

During the event, Muzyka, who is the founder and CEO of Threshold Impact, was presented the Start Alberta Tech Awards’ Rod Charko Service Award, which recognizes an individual that has gone above and beyond for the venture capital and technology ecosystems in Alberta.

In conversation with ICTC, Muzyka identified two nascent Alberta industries with outstanding growth potential: Personalized medicine and AI development, specifically under the umbrella of the Edmonton-based non-profit Amii (Alberta Machine Intelligence Institute), which is world-renowned for its work in machine learning and artificial intelligence.

“We have a unified database of personalized health information from Albertans. Those are two world-leading advances that will actually give us a head start on other regions in the world if we tap them,” says Muzyka, who practised ER medicine in rural Alberta for a decade while he simultaneously built the video game company BioWare, which sold to Electronic Arts for $870 million in 2007.

Neglecting to invest in AI and health tech at this critical juncture, he said, could allow other jurisdictions to get the jump on Alberta, depriving Albertans of the potential economic benefits, including new tech jobs.

According to the recent ICTC report A Digital Future for Alberta, the province’s current trajectory of diversification is expected to create the demand for nearly 9,000 core digital jobs in Alberta by 2023, for a total employment in excess of 77,000 in that timeframe.

“Diversification is risky, it’s slow, it’s hard,” Muzyka says. “It requires capital, mentors, access to customers, government/private partnerships, access to talent and great universities—which we have. But we can’t afford to lose that advantage. We need to draw these resources together and move startups to scale ups.”

Launch Party 10 brought together a diverse group of startups, from a maker of vitamin and energy strips that dissolve on your tongue (and actually taste good) to a sea bass/hydroponics farm in a warehouse in a Calgary business park.

But the bulk of the startups in attendance were heavily leveraged to digital technologies. Here is a brief sampling:

Colin Dalton, Neuraura’s co-founder and CTO, said the company is working on the next generation brain machine interfaces, connecting the electrical brain activity to computers “so you can actually see what is happening.”

“Our initial market is epileptic neurosurgeons who are working here at the [Calgary] Foothills Hospital. We have designed new sensors to displace the 20+ year old legacy sensors, which are very big and noisy, not very good for the patients and that don’t provide the best data,” he said. 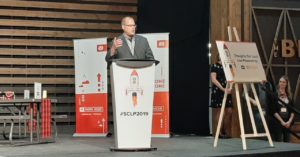 “Those better diagnoses help doctors work out how much of the brain to remove. We want to get to the point where they don’t have to remove parts of the brain. We c

ould send electrical signals and interrupt those little earthquakes in the brain – the seizures – and stop them. It’s called neuromodulation. It’s the fastest-growing field in medical-device technology,” Dalton said.

Neuraura is collaborating with universities around the world. It has its first human trials scheduled for next year in Australia. Currently it is also in the midst of a seed funding round, looking for collaboration opportunities, partnerships and money. (Neuraura could become cashflow positive in two years, according to Dalton, if it focuses solely on the epileptic neurosurgery platform, or within a year if it focusses on research, which doesn’t require FDA approvals.)

CrossingsCloud Inc. – a cloud-based solution that augments and streamlines the application and approval processes for crossings, ground disturbance, and road-use applications.

Joel Edwards, president of CrossingsCloud leveraged over a decade of surface land and oil and gas business experience and a bent for software development to a provide an automated land-crossing requests and approvals process.

“Companies like TC Energy have pipelines all over Canada, Telus has fiber all over the place, so anybody who wants to build over or around that infrastructure needs to obtain permission, which comes in the form of a crossing agreement,” Edwards explained.

A traditional crossing agreement takes weeks, sometimes months, to turnaround and involves multiple administrators in what is a manual process.

“We streamline and standardize that process and reduce those timelines from weeks to minutes while using a quarter of the staff,” Edward says.

CrossingsCloud has been on the market for a year and a half now and has 10 employees and contractors.  Telus and Fortis Alberta are its anchor clients. And it’s turning a profit thanks to lean startup methodology.

“We’re expanding the product horizontally and providing more depth. We’re already looking at launching our second module for joint use of roads,” said Edwards, who is a landman by trade and recalls putting together land packages for clients of the family’s Lethbridge-based land company from the age of 11.”

Bitvo – on a mission to become Canada’s premier cryptocurrency exchange.

Anyone who has followed Bitcoin’s rollercoaster ride from a peak of $25,271.48 CDN in December 2017 to $4,260.65 a year later could be forgiven for dismissing cryptocurrency as a fad. But the total market capitalization for cryptocurrencies currently is still over $250 billion.

“That’s a lot of value to be destroyed if it’s just a fad,” says Pamela Draper, president and CEO of Bitvo.

“Our secret sauce is that we have a strategic partnership with a schedule-one Canadian bank. The friction point in crypto is never transacting once you are in crypto, but the problem is getting money on and off crypto into fiat currencies [any government-backed currency],” Draper said.

Converting cryptocurrencies into dollars or vice versa typically takes several days to a week. Bitvo can transact this within an hour—and it guarantees the conversion within 24 hours.

“We got the idea for this two years ago, built a platform for six months, did a soft launch to friends and family in June last year and fully launched to the public in August 1, 2018,” Draper said.

With over 3,000 users, Bitvo trades millions of dollars a day on the platform. Its trading is focussed on the top three cryptocurrencies: Bitcoin, Ethereum and Ripple. The company currently consists of 10 people and is “cash neutral” in the current cryptocurrency bear market.

“But we’re very excited for when prices pick up again,” Draper said, adding, “Cryptocurrency is just like stocks or any other commodity. If you have a portfolio of assets that include your home, some stocks and mutual funds, why not put some portion of it in a diversified asset such as a cryptocurrency?”

Acuspire – a future without job search.

Stephen Wensley founded Acuspire after he and a family member experienced a particularly difficult job search.

Acuspire also improves the candidate-search process for employers. Subscribing employers are provided seven days to review candidates, which includes a generous refund policy if not satisfied with the results.

The startup incorporated in 2016. It took Wensley (who has a background in software development) and team two and half years to develop its algorithms that are of “higher accuracy” than what is currently available in the marketplace.

Acuspire currently has 155 employers registered and works with about 15,000 jobseekers. It operates in Calgary, Edmonton, Vancouver and Toronto, and is expecting to launch in more Canadian cities.

“We’ve even been able to source in-demand tech talent such as full stack developers for some of our clients,” Wensley said. “We also work with job seekers who are new to Canada and found good opportunities for them with companies that are willing to look past the Canadian experience requirement.”

The Job Showcase ran on the lower level of the Big Four Stampede building that hosted the Launch Party. White Whale was among some 19 startups looking to hire for two open positions.

It’s a tall order, but White Whale is also up against some stiff competition. It goes head to head with IBM, Microsoft and Deloitte but has carved out a growing niche for itself in oil and gas, aerospace and defence.

With 11 employees and five years under its belt, White Whale is cash flow positive. It didn’t need to raise any money to launch and expands from cashflow.

Its focus is helping clients collect data from systems that typically don’t talk to each other, centralize that data and apply intelligent algorithms to process that data to solve a particular business problem. In the oil and gas space this can mean optimizing fracture stimulations in resource plays or reducing the steam-to-oil ratio in SAGD (Steam Assisted Gravity Drainage in situ oil sands operations).

This year’s audit will be AI-enabled: How one Canadian business is changing the Financial Services sector, and supercharging the Audit and Assurance industry

This year’s audit will be AI-enabled: How one Canadian business is changing the Financial Services sector, and supercharging the Audit and Assurance industry