By Ryan Mclaughlin23 March 2020 No Comments

Just a month ago, I was happily presenting ICTC research on smart mobility –one of ICTC’s smart city priority areas—at the MOVE ‘Mobility Re-imagined’ 2020 Conference in London, UK. The conference brought together more than 10,000 attendees from around the world. Today, large conferences like these are largely a thing of the past, with many suggesting that they may not resurface for months or even years. At the time that I traveled to London, troubling videos were emerging from Wuhan China, about a mysterious virus that seemed to be spreading across the region and shortly after, the country. While the news of this virus was eyebrow-raising, few Westerners appeared panicked (including myself); some were concerned, but a dry cough largely remained something to nudge and joke about. Corona? – Like the beer?

Even weeks later, as the virus began circulating outside of China’s borders, reactions remained dull in many parts of the world; after all, two previous and far more deadly coronaviruses were recently snuffed out with limited damage. SARS (Severe Acute Respiratory Syndrome) was stopped after 8,098 caught it and 774 died; just 2,506 people caught MERS (Middle East Respiratory Syndrome) with 862 deaths. In both cases, these viruses had limited impact in the West. SARS infected 375 people in Toronto, with a fatality rate of just 44; MERS never touched down in Canada. Perhaps these experiences, coupled with notions of ‘extreme’ reactions to the virus in China at the time, had worn out our panic reflex.

Fast-forward a month and a half from my travel to London: confirmed cases scaled by more than 1000%, totaling more than 300,000 cases in more than 185 countries. What may have seemed like a far-away warped version of a seasonal flu at one point, today COVID-19 is expected to deliver an enormous economic blow to the entire globe, with possible death rates in the millions. I hope these estimates are wrong.

Currently residing in France, my past few days have been under one of the West’s first legislated nationwide quarantines. From noon, March 17th, French residents may only leave their homes for one of the following reasons:

While many nations now suggest similar behavior, these rules are monitored more closely in France; I am expected to carry ID whenever I leave the house and was required to complete a form confirming that any trip if for one of the allowed reasons. Failure to do so can result in a fine of €135. 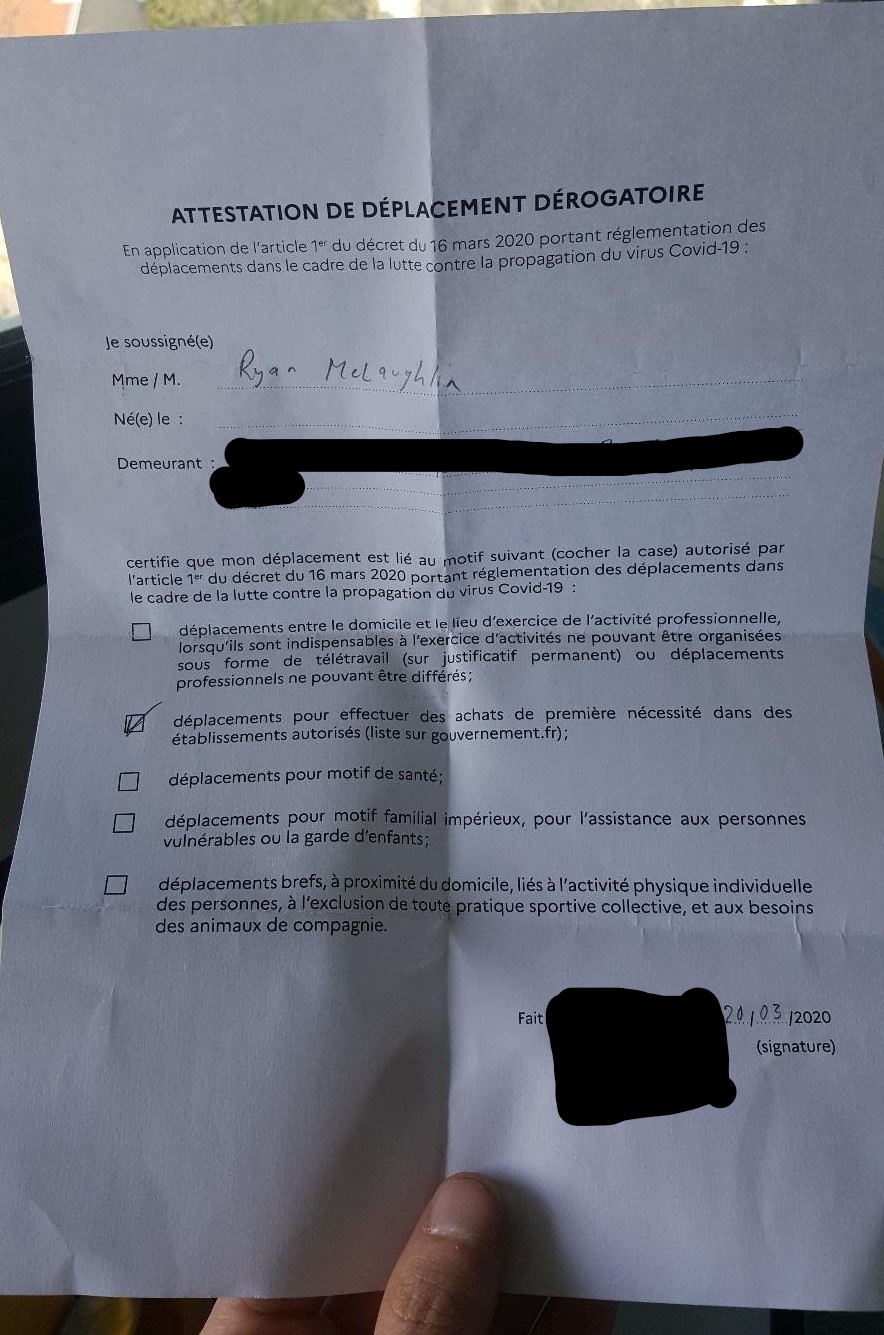 Aware of the events in France, friends and family from Canada have reached out asking what it’s like “on the ground”; what daily life is like under lockdown. While it’s only been a few days, undoubtedly life is different. People in public seem both abnormally nervous and friendly. Cashiers wear masks and gloves, and many stores have built plastic barriers at tills, to prevent customers from coming too close. Queues form outside many stores, as a limited number of people are allowed in at one time. Shelves are a bit sparse and people are uneasy and rushed. Streets are mostly empty, aside from the frequent siren of ambulances and UberEats couriers scooting around. Occasional joggers bounce down the sidewalks. In the evenings, the neighborhood opens up with a chorus of clapping and banging and cheering, as neighbors vent their frustration and fatigue out the windows.

Life in France has turned out a little bit different than expected. Social distancing is certainly not part of the stereotypical image I had of “the French way of life” (nor is it anyone’s ideal way of life). As I sit in my apartment looking down on the empty streets, I wonder if should I stay, or return to Canada, and in so doing scroll my way through another 14-day mandatory self-quarantine. I can’t help but wonder what life in France will come to look like as after virus is eventually defeated. One small prediction: facemasks may become part of everyday life in Western countries like France and Canada as they already are in many parts of Asia. I hope our pandemic preparedness improves, and perhaps next time a novel virus emerges, borders need to urgently snap shut. Besides that, I am confident that things will eventually return to normal; the Champs-Élysées, like Yonge and Robson Streets, will rise again, and eventually bustle with (possibly face-masked) pedestrians. 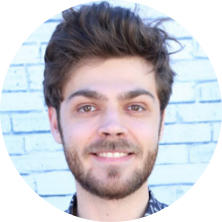 Ryan McLaughlin is a Senior Economist & Research Analyst at the Information and Communications Technology Council of Canada (ICTC), a national centre of expertise on the digital economy. At ICTC, Ryan works on analysing labour market information, statistical and econometric analysis, as well as economic forecasting. Ryan has contributed to ICTC reports on topics such as blockchain, artificial intelligence, 5G mobile technology, as well as papers focused on forecasting the digital economy within the provinces and across Canada. Ryan is currently spending a year abroad in France, where he hopes to perfect his French language skills and gain valuable new experiences.