By Paul Stastny14 January 2021 No Comments 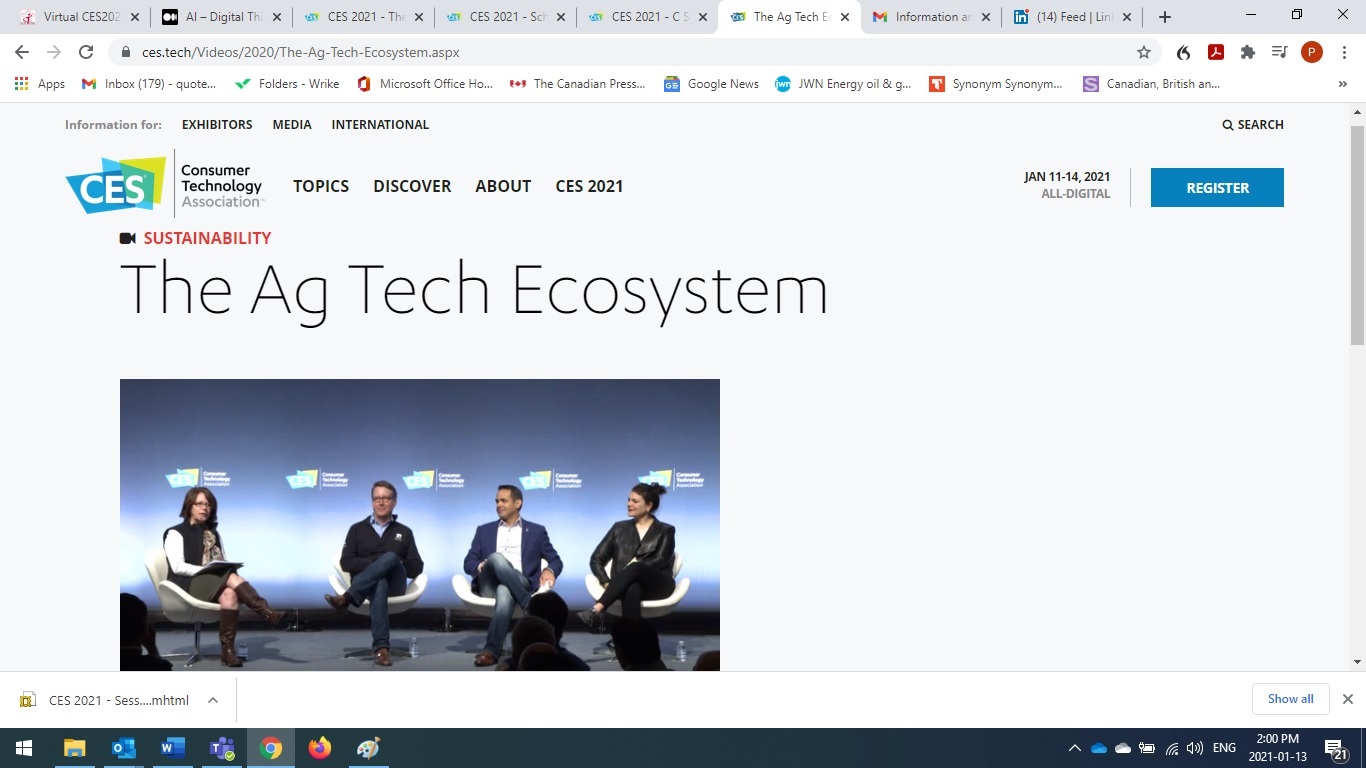 A consumer electronics show might not seem like the obvious venue for industry visionaries to discuss how advanced technology in agriculture is tackling challenges of climate change and population growth, but CES2021 is much more than a tech-gadgets show.

Agriculture also happens to be one of the vanguards digital innovation.

“[Farmers] are some of the most creative and innovative folks that you will ever meet,” said Julian Sanchez in a panel discussion titled The Ag Tech Ecosystem on Day 3 of CES2021.

Sanchez is Director of Precision Agriculture and Business Development for John Deere. Since 2011, he has made significant technical and digital innovation contributions. He holds over 20 patents, 35 publication credits and is a John Deere Fellow in Technology Innovation.

“[Farmers have] always been agronomists of some sort but, in the last few years, they’ve also become IT integrators and they’ve become data scientists in their own right,” he said.

Farmers today are conversational in geospatial technology, shape files, and software terms that “the average person knows nothing about,” said Sanchez.

Much of the funding for Granular, a tech company that helps farmers “run stronger businesses and steward the land,” came from Silicon Valley, she said.

The convergence of agriculture and tech is largely fuelled by the search for profitability, said panelist Sid Gorham, President, Digital Business Platform, Corteva Agriscience, which bills itself as “the only major agriscience company completely dedicated to agriculture.”

Despite the influx of interests looking to improve farming, Vissilos said it’s a misconception that farming is broken.

“The farming system is actually incredibly efficient. It’s come to operate according to all of the market signals that are in place,” she said.

But where entrepreneurs can find opportunities to improve agriculture is in farming differently, more sustainably, driving “improvements not only for farmer profitability but also for environmental outcomes,” she said.

Food production is the biggest and oldest supply chain, but it’s still very analog, Gorham noted. Digitization of agriculture will likely not disrupt the food system the way that Amazon disrupted retail, but he believes it will make the food supply chain function better.

“In particular, [digitization will] link the producer to the consumer so that we can make more efficient and informed trade offs about the environmental footprint of producing our food and the price we pay for food,” Gorham said.

As for tech developments on the ag horizon, The Nature Conservancy’s Vassilos listed robotics, gene editing, and the synergies of growing interest in the sector.

“There’s an opportunity to bring in fully autonomous vehicles that will allow for more diverse production. The reintroduction of forestry solutions into large-scale operations, intercropping and double cropping—there’s just a lot of interesting things that could potentially happen with the introduction of robotics,” Vassilos said.

Beyond gene editing in corn and soybeans, she expects genetic developments in other crops.

“And lastly, the fact that we are sitting here in the Consumer Electronics Show in Las Vegas, and all of you in this audience—possibly most of you without agricultural backgrounds—are interested in this space, that to me is an incredible opportunity to drive more innovation and bring outside talent and thoughts and business thinking and new perspectives to the space.”

For insights into how artificial intelligence is being used in the forestry sector and other ICTC research and blogs, check out the Digital Think Tank by ICTC’s Medium Publication.

Trust is Key to the Growth and Acceptance of AI in Healthcare: CES2021 Panel Discussion

Trust is Key to the Growth and Acceptance of AI in Healthcare: CES2021 Panel Discussion